With the 2010 filing season upon us there are a few strategies you can still employ to adjust your tax bracket. A tax bracket is a defined threshold of “taxable” income levels taxed at a certain percentage(i.e. 10%, the lowest and 35%, the highest). The most common tactic is contributing to a retirement plan if you are on the borderline between two tax brackets or just want to lessen your liability. If you do not have the funds available to contribute to a retirement plan or utilize any other strategies to get your 2010 taxable income lower, then you need to start planning for 2011.

Thanks to the 2 year extension of the “Bush Era” Tax Cuts, the tax percentages have remained the same, however, the income thresholds have changed slightly. As stated in our article Death and Taxes – Do I Need To File A Return This Year? the standard deduction and exemption amounts from 2009 to 2010 remained virtually the same with the only difference being a bump of $50 for the standard deduction on Head of Household status from $8350 to $8400. For 2011 the exemption amount will go up $50 from $3650/individual to $3700/individual. The standard deduction will go up across the board, with the following increases for each respective filing status:

Keep in mind that these rates are also important for those who itemize their deductions as you need to cross those thresholds in order to benefit from common itemized deductions such as mortgage interest, charitable donations and state/local taxes paid.

With that out of the way, here’s your 2010 Tax Brackets based on “taxable” income which is: Adjusted Gross Income – (Adjustments + Deductions).

Numbers below provided by IRS.gov(with the exception of MFJ/QW and MFS for 2011): 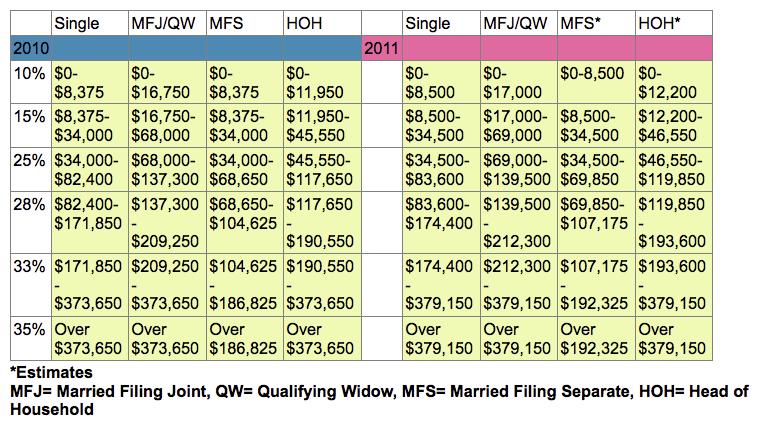 An example of tax planning strategy would be if you were MFJ and your 2010 taxable income was $118,000, which puts you in the 28% bracket. Say you expect a slight pay increase in 2011, you might want to find a way to deduct enough or get more adjustments to get you in the 25% bracket for 2011. In addition, for 2010, you could just contribute an extra $500 to your retirement plan(if you haven’t already maxed it out) to get you to the 25% bracket.

Knowing the RIGHT deductions and adjustments you can take is just another reason you NEED to contact us now to consult with a Tax Patriot so we can use our extensive knowledge of the tax laws to help you pay less! Remember, audits are usually the result of either improper/overstated deductions, adjustments or credits with the remainder being from understated income. The tax laws are complicated! This is why you need a professional who knows them and a full understanding of the tax laws is behind everything we do.