Q: WHY ARE YOU NAMED JEFFERSON-FRANKLIN TAX SERVICES?

We wanted a name that stood out and best exemplified our commitment to providing you with the best possible  income tax service. Most people dread paying taxes and our great nation was founded by brave men who risked their lives for lower taxes.

While “Founding Fathers Tax Service” has a ring to it, we asked ourselves,”Who were the most outspoken voices on taxes?” Answer: Thomas Jefferson and Benjamin Franklin. 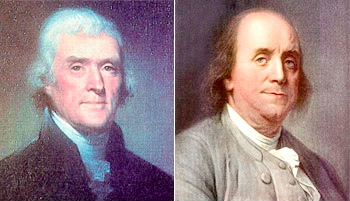 Taxes can be unpleasant, however, they are necessary to support our wonderful Democracy.

Thomas Jefferson said so himself,

“It is a wise rule, and should be fundamental in a government disposed to cherish its credit, and at the same time to restrain the use of it within the limits of its faculties, never to borrow a dollar without laying a tax in the same instant for paying the interest annually, and the principal within a given term.” – Letter to John W. Eppes(6/24/1813)

“Our new Constitution is now established, and has an appearance that promises permanency; but in the world nothing can be said to be certain except death and taxes.” – Letter to Josiah Quincy(9/11/1783)

In today’s economy, though, many people are unfairly taxed and paying much more than they should. We also know that some just don’t pay at all which affects the rest of us.

Upholding the ideals of Jefferson and Franklin are essential in the service we provide for you! It is our responsibility to uphold their ideals in giving you the best service for all of your Tax Planning, Tax Consultation and Tax Preparation needs. In addition, we stand up for you in matters regarding Unfair Taxation, Audit Representation, IRS Levies, IRS Wage Garnishments and IRS Liens.

Not only do the names Jefferson and Franklin symbolize our commitment to you, but so too does the currency on which their faces appear:

Jefferson is on the nickel. This symbolizes that we will not nickel and dime you on fees and pledge to give you the best service at a fair price. Please note that this does not mean we are the cheapest outfit on the block, however, we stand by providing as much value as we can for the fees we charge.

Franklin is on the $100 Bill. This symbolizes our pledge to help save you 100’s of dollars in taxes and either lower your balance due or maximize your refund.

Fun Fact 1: Did you know that Benjamin Franklin was born on Jan 17th? This is about the time that tax season really gets going and he died on April 17th, the filing deadline for both the 2010 and 2011 income tax filing seasons.

Fun Fact 2: While Franklin’s birthday is around the time the tax season starts, Thomas Jefferson was born on April 13th, just before the end of the tax season in most years(April 15th).

Fun Fact 3: The “Old Style” birth date for Benjamin Franklin of Jan 6th(based on changes in the calendar) is the same birth-date as one of our founding Tax Patriots.